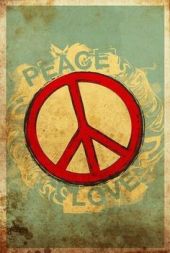 1967 … a year of protests, riots, and hippies. It was also the year I “pledged my troth” to my husband. For me, it was the beginning of my independence and my first steps to believing I was an adult. Of course I wasn’t independent or an adult … I was only taking small steps to be that person.

I have spent the last several days thinking about 1967. It was a time of a “changing of the guard” for our country. We were the new generation … we were determined to change the world! In the summer of 1967, San Francisco set the tone for a nation of young people anxious about civil rights and a growing war. It was the “Summer of Love” mixed with protests, riots, and fear.

1967 was underwritten by the scaling up of the Viet Nam War and the un-kept promises of the Voting Rights Act. Riots popped up throughout our country … starting in New York with a protest turned violent when a black man was arrested for a traffic violation and rumors were immediately spread that the police had murdered him. In July protestors took to the streets in Detroit. Forty-three individuals died, 7200 were arrested and 2000 buildings were destroyed during the Detroit Riot/Rebellion/Revolution. Martin Luther King had begun speaking out against the Viet Nam war. For the first time less than 50% of Americans were in favor of the war effort. More and more of our young men, especially the poor, were on their way to the jungles of Viet Nam. Viet Nam loomed large for my husband and others who would soon lose their student deferments.

“Most of the people here looked square as could be,” Danny Cox, folk singer and songwriter. Cox moved from California to Kansas City in July 1967.  Cox often performed at the vanguard along with Brewer and Shipley and other up and coming folk stars. We even got to see Steve Martin at the Vanguard!  A newspaper man hanging out in Volker Park concluded “there may be 20 bona fide hippies in Kansas City.” My first date with my husband was to the Vanguard. We drank tea and talked until the wee hours. It was so exciting!

Kansas City had its own Summer of Love and war protests and riots. But this was Kansas City. Our Summer of Love consisted of an ongoing ‘Party” at Volker Park. I lived in a small apartment on 48th Street  . . . just west of Volker Park. We would go over on Sundays and be a part of the excitement. The music was great … there were all kinds of people. Young parents brought their little ones in strollers. It was our generation’s salute to a growing movement to change the world.  “Peace Not War!” “Love Not Hate!” We demonstrated our “cool” by going to the Vanguard Coffee House at 43rd and Main and to “art” movies at the theater on Troost. Kansas City was still a very segregated world. The “great divide” (The Plaza and Brookside neighborhood built by J.C. Nichols) was very successful in maintaining our segregated world.

This photograph was taken in San Francisco in 1967. But it just as well could have been at Volker Park. We only lived a block away from the park and would walk over on the weekend to hear the music, talk politics and lend our support to the good causes!

The week I was married was the week of the Kansas City “riots.” As I thought about 1967 this week, I tried to find stories and pictures of that hot week in August. They aren’t there! It’s like this week of protests and violence never happened here. When I searched for pictures and stores, almost every one was about the Chiefs losing the Super Bowl to the Packers and another crazy trade or stunt that Charlie “O” and the Kansas City Athletic s had made. It feels like Kansas City wanted to quickly erase this small “blip” in our history. It is very true what happened in Kansas City was small compared to what was happening in other large cities. But I remember. I walked downtown to my job the morning of my wedding. The City had closed down all public transportation. The streets of Kansas City were deserted. The night before we had rehearsed for our wedding. Our minister kept telling us to not worry if no one came to the wedding  . . . as long as we were there and he was there we would be married. Lots of people came to the wedding … but the streets in Kansas City were dark. On our street there was a little corner grocery store. The day of our wedding the elderly man who owned the store was so afraid when a young black man walked in the store he suffered a heart attack. When we flew over Wichita that night (on our way to Acapulco  . . . we were “non-revving” thanks to my job at Braniff Airlines) rather than landing because Wichita had also shut-down. All we could see from the air were police car lights.

So what does this have to do with 2017? I think a lot. First I am disappointed in me and my generation for forgetting our hopes and dreams for a better world. While some very important steps have been made over these last 50 years, it seems these small steps are disappearing in the sand. The threat of nuclear war is once again part of our daily lives. Americans of my generation want to undo voting rights, destroy the programs of the War on Poverty, and continue to engage in conflict through wars rather than resolve our differences through diplomacy. So much is not different from 1967. More and more people of color are being prevented from voting, police are still killing black men and women over traffic infractions.  We are STILL arguing about Women’s equality. And stepping back from equal rights for our LGBT friends. Have we forgotten our mission in this world? Have we let greed and hate and apathy fog our vision for the world? And we face a new threat … climate change … global warming … or “extreme weather” as the current climate change deniers now say.  What is the “Summer of Love” generation doing about this grave threat to our world’s future?

I am heartened by the marches, protests and leadership of our younger Americans. But we haven’t lived up to our promises to ourselves or our children. It is all too easy to sit back and think we no longer have the responsibility to live up to these promises … after all we are old and younger, smarter folks are taking up the banner. But we must not forget who we were and live our lives as the idealists and impatient generation we were in 1967. 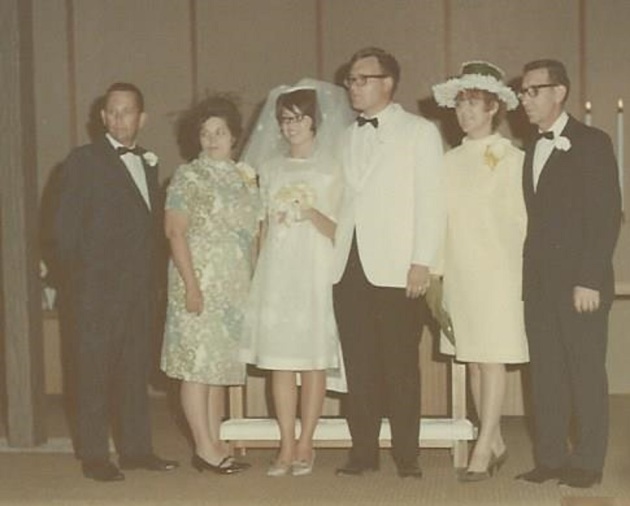 Our wedding in August 1967. My parents are on the left. My husband’s are on the right. It was a small wedding. We were happy and anxious to start our life together. My husband’s uncle sang “One Hand One Heart” from Westside Story.  Unfortunately I don’t have any photos of my brother and little sisters who were part of the Wedding party!

I turned 70 this year. So many things have happened in my lifetime. But this year’s changes feel different. More distressing. More challenging. And the world keeps spinning faster and faster for me. I have always been taught that time is relative.  But I am only now realizing what that means: the older I get the faster the hours, days, weeks and years go by. This blog is how I hope to remember who I was and how it relates to who I am now. It is about how I cope today and keep up with the world I am living in.

My husband and I are celebrating our 50th wedding anniversary this month. When we were first married I never even thought about celebrating a 50th anniversary. My life was all about NOW and tomorrow. Certainly not about 50 years from now! We were very young and impatient to have our adult lives and make our impact on the world.  I hope I have been strong. I hope I have used my mind and spirit to change the world for the better … even just a little. But most important to me is I hope I can continue to contribute to the world as it is in 2017. I hope you will join my journey as I reflect and challenge myself to remember what I have learned over these 70 years and remain open-minded for new things and new ideas. I certainly welcome and look forward to your comments and insights.  If there is one thing I have learned in 70 years … my world is such a small, small part of the bigger picture.